A Brief History of the #BlackLivesMatter Movement

In 2020, we witnessed a massive human rights movement that took the country, and the world, by storm. The widespread impact of the #BlackLivesMatter protests touched one of the U.S.’s biggest players: industries.

As people become more socially conscious, the onus of responsibility has shifted to businesses, many of which have come out with statements supporting, or in some cases, denouncing the movement. The problem with said statements, however, is that consumers have become increasingly aware of the difference between pandering and a meaningful discussion of institutional racism.

The U.S. has a very unique relationship with its businesses; successful entrepreneurs are lauded for their brilliance, large industries have crept into every corner of our life, from baking and health to beauty and convenience. Consumers are now asking them to do the same for social responsibility. While unprecedented and unexplored territory, it’s now up to industry professionals to take a meaningful stance on racism.

Our goal: to provide a straightforward and distinct approach that enhances understanding of the #BlackLivesMatter movement.

Going forward, we will be discussing some of the best ways for businesses to consciously respond and react to the current state of affairs. These articles are our journey into the fabric of social participation and responsibility, as we hope to not only provide insight into the changing status quo, but to educate ourselves and dive into a purposeful self-examination of what it means to be an ally.

It’s important to note that there is a considerable amount of nuance behind the movement to redefine corporate identity in order to make it more sustainable for a socially responsible future. While it is, in a sense, in a business’s self interest to be more inclusive and attract more customers through a catch-all approach, it is also important that leaders in the industry believe in a sense of equality and ensure that their actions are sincere.

As a minority-led marketing agency, Ready State is prepared to start a conversation and contribute to a safe space where all small businesses and corporations can understand how to be responsible social actors, committed to promoting diversity and ending discriminatory business practices.

As we begin to put out this work, we want to invite you to come along for the journey — one of introspection, education, and, finally, action.

On May 25th, a brutal video — showing a Black man’s final moments at the hands of the police — began to surface on social media. Within a few hours, it was picked up by various news outlets, and this man’s identity was revealed to the public. His name was George Floyd: it’s a name you have probably heard many times since.

Details surrounding his arrest also became national news; Floyd was the victim of a lethal neck restraint; it took him 8 minutes and 46 seconds to die; his last words were “I can’t breathe.”

Since this tragedy, #BlackLivesMatter activists took to the streets to protest. While Floyd’s death acted as a catalyst, the protestors took on the larger issues of police brutality, state-sanctioned violence against African-Americans, and systemic racism. A poll released in early June by Kaiser Family Foundation reported that approximately 26 million U.S. residents were involved in the protests.

But #BlackLivesMatter is not a new phenomenon, it has been gathering steam since 2013. What does the movement stand for, and how has it reached international recognition?

It Started With A #Hashtag

In February 2012, Trayvon Martin, an unarmed seventeen-year-old African-American boy, was fatally shot by neighborhood watchman George Zimmerman. The trial that ensued ended in tragedy for the Martin family; Zimmerman was acquitted on all counts, as the jury believed that there was not enough evidence to prove that the former committed second-degree murder.

Upon the verdict, the hashtag “#BlackLivesMatter” began to trend on social media platforms such as Twitter and Instagram. The unifying power behind the hashtag led to an organized effort: a 31-day occupation of the Florida State Capitol’s ground floor against “Stand Your Ground” laws.

One year later, #BlackLivesMatter protestors took to the streets to protest the killing of another unarmed black child, eighteen-year-old Mike Brown. A group of more than 500 activists traveled from all over the country to Ferguson, Missouri. Many within the group — which included lawyers, journalists, doctors, and students — canvassed neighborhoods, started fundraisers, and partnered with national organizations that supported causes from gun reform to black education.

Both of these events inspired the three founders — Patrisse Cullors, Alicia Garza, and Opal Tometi — to form the official Black Lives Matter Network. What makes this movement so distinctive from other organizations is its focus on decentralization.

Something digestible, something easy to repeat, something powerful that signaled to activists that it was time for concrete change. Dr. Meredith Clark, a journalist and professor at the University of Virginia, speaks on the monumental impact that technology has had in defining the movement.

By making the platform more accessible, each individual has the opportunity to lead and empower others to take a stand. Where other organizations had a membership list and distinguishing ranks, the #BlackLivesMatter movement had an online platform and guiding principles.

Although the movement began primarily online, Garza, Cullors, and Tometi noticed that the message translated to action. The Black Lives Matter Network currently has over 30 chapters worldwide connecting the community in an effective and decentralized manner.

The official mission of the Black Lives Matter Network is to eliminate white supremacy and respond to state-sanctioned violence against Black communities across the country. Some of the guiding principles the network hopes to communicate include normalization of Black communities and families, healthy social engagement among minorities, and restorative justice instead of a punitive system.

In the face of systemic oppression, the movement seeks to dismantle or reform institutions that cause harm to African-Americans. Some of these systems include the school-to-prison pipeline, gentrification, and the use of excessive force against African-American communities by the police.

The phrase itself has often been misinterpreted or misused both by dissenting voices and self-proclaimed allies. The counter slogan, #AllLivesMatter, was created to offer up a different viewpoint. However, as the founders and its supporters have responded, #BlackLivesMatter was not created with the intent that only black lives matter.

In the functional context of white supremacy (an institutional system that promotes white-domination and targets African-American and minority communities), the phrase liberates a community that is repeatedly undervalued.

Since collective progression towards a better humanity involves racial equality, the counter-movement is often seen as racially dismissing.

Many activists have attempted to explain the importance of the movement with the phrase, “all lives can't matter until black lives matter.” #BlackLivesMatter points to specific problems occurring in the black community that are absent in other communities — problems that cause a senseless loss of life.

The leaders of the network are committed towards a world in which Black people are viewed with empathy and treated fairly. The leaders of the #BlackLivesMatter movement are the people that spread awareness and work towards cultural and legislative change. In homes, in families, in the workplace, and within yourself, the #BlackLivesMatter movement is for everyone who supports an equitable and empowered future.

Although mass online presence was able to motivate people onto the streets to protest, does it come with policy change?

The #BlackLivesMatter movement has actually made significant steps at the government-level. At its most basic stage, the public was able to hold their representatives accountable.

Labor groups in Illinois blocked the reelection of prosecutors that turned a blind eye to police brutality. Grassroots Black liberation organizations in Florida led the campaign against the prosecutor who failed to convict Zimmerman but prosecuted a Black woman for firing a warning shot at an abusive partner. Students in Missouri worked towards the resignation of the University of Missouri president over his dismissal of on-campus racism.

One benefit of such decentralization is the political changes made from the ground up. Many citizens are exercising their basic rights in order to uphold the standards of government.

Democrats in Congress have taken the political turning of tides to reveal legislation regarding police reform. The Justice in Policing Act of 2020, introduced by the House Speaker and members of the Congressional Black Caucus, was created to increase accountability for police units and eradicate prejudiced policing.

As businesses adapt to the changing nature of social justice, hopefully, executives and employees alike will begin to understand the monumental impact that meaningful social discourse will have, not only on their customers, but also on their communities. Companies will be able to create a network of support among their employees and develop a sense of transparency with their consumer base.

The #BlackLivesMatter movement is holding companies accountable because its message is value-based. Its major impact has been largely moral. Business is at the forefront of an ethical and economical touchstone, and the industry is looking for effective participation to articulate clear strategy and support.

At Ready State, we hope to encourage a culture that holds a passion for social equality and a community dedicated to civic engagement, and these articles are our first foray into an introspective education. Join us.

“What We Believe.” Black Lives Matter Network. Retrieved from

The Largest Movement in U.S. History.” The New York Times. Retrieved from 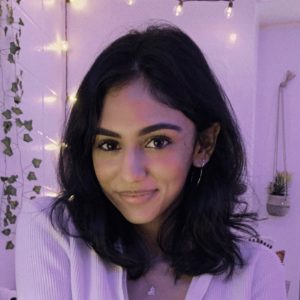 Esha Deokar, Research Intern. Esha is a second-year at the University of Chicago pursuing a BA in Art History & Economics with a Specialization in Business. Off-screen, you can probably find her at a local thrift store, vintage record shops, or on a beach.