A trail of words: Literary life in North Beach

After years living in Oregon, I recently moved back to San Francisco and resumed my exploration of its literary history. Upon stumbling across a Chronicle interactive map of city spots that appear in famous literature, I decided to research the writers whose work helped make those spots special.

Throughout the city, you’ll find evidence of literary and artistic genius ranging from Frida Kahlo to Mark Twain. I’m a bit of a homebody, so I restricted my peregrinations to the North Beach neighborhood—where Ready State’s office is located—bordered by The Embarcadero, Broadway, and Columbus Avenue.

Let’s take a walk around.

“Leave the gun. Take the cannoli.” 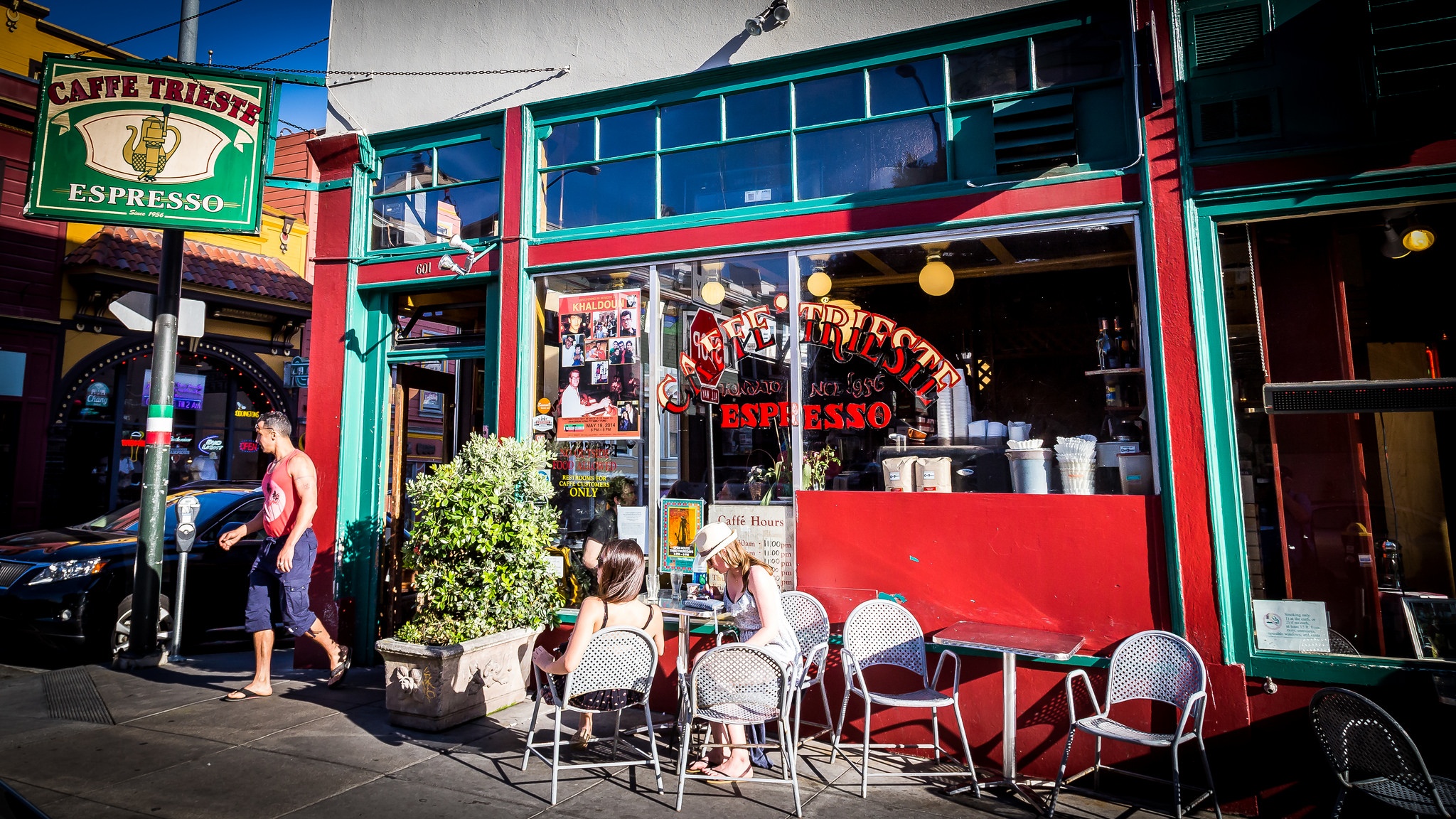 601 Vallejo Street. Francis Ford Coppola wrote the screenplay for The Godfather at the Caffe Trieste, a coffee shop Italian immigrant Giovanni Giotta opened in the 1950s. Trieste, famous for its Beat Generation and comic clientele, as well as its musical performances, continues to attract those who value literature.

“Remember not to forget the dying colors of yesterday

As you inhale tomorrow's hot dream, blown from frozen lips.

Remember, you naked agent of every nothing.”

― Bob Kaufman, Forgot to Not

1398 Grant Avenue. Bob Kaufman hung out at the Coexistence Bagel Shop in the 1950s. It was considered the social center of North Beach at the time.

Kaufman, born in New Orleans, was an African-American Jewish poet with a German Orthodox father and a black mother from the Caribbean island of Martinique. His grandmother was a slave.

The French called Kaufman “the black American Baudelaire.” He famously fought, sometimes physically, with the cops, including one named William Bigarani, to whom Kaufman referred when he wrote this on a wall: “Adolph Hitler, growing tired of fooling around with Eve Braun, and burning Jews, moved to San Francisco and became a cop.”

“I saw you, Walt Whitman, childless, lonely old grubber, poking among the meats in the refrigerator and eyeing the grocery boys.

I heard you asking questions of each: Who killed the pork chops? What price bananas? Are you my Angel?”

— Allen Ginsberg, A Supermarket in California 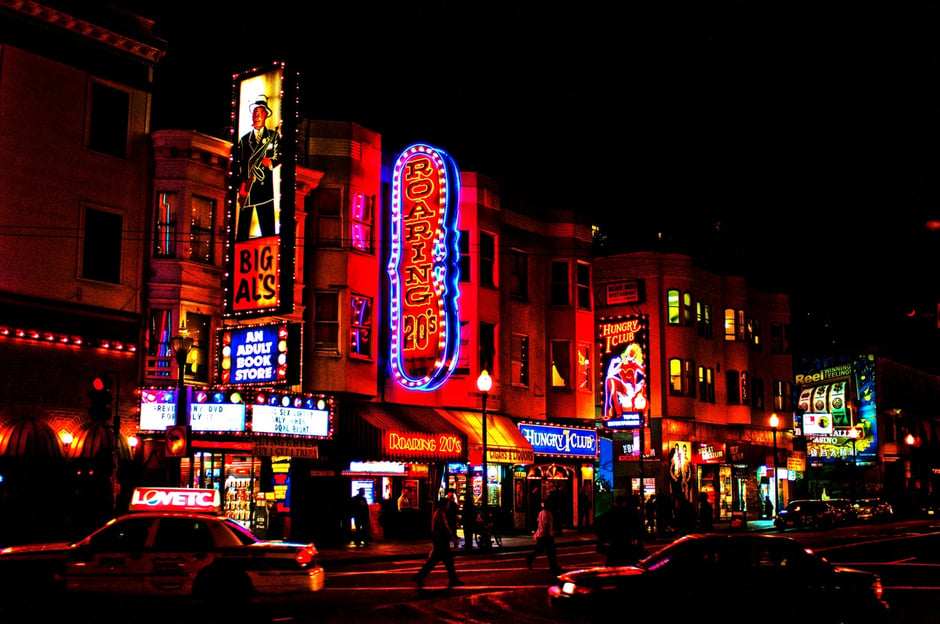 Broadway at Columbus Avenue. In 1954, Carolyn Cassidy dropped Allen Ginsberg off here after driving him up from San Jose. She’d caught him in bed with her husband. She lent him $20, and he walked 85 feet and got his first room in San Francisco, at the Marconi Hotel, 554 Broadway. For those who prefer their literary history full of doilies and decorum, this intersection’s strip joints may not be your cup of tea. Its character has not significantly changed since Ginsberg arrived.

“the madman bum and angel beat in Time, unknown, yet putting down here what might be left to say in time come after death,

with the absolute heart of the poem of life butchered out of their own bodies good to eat a thousand years.” 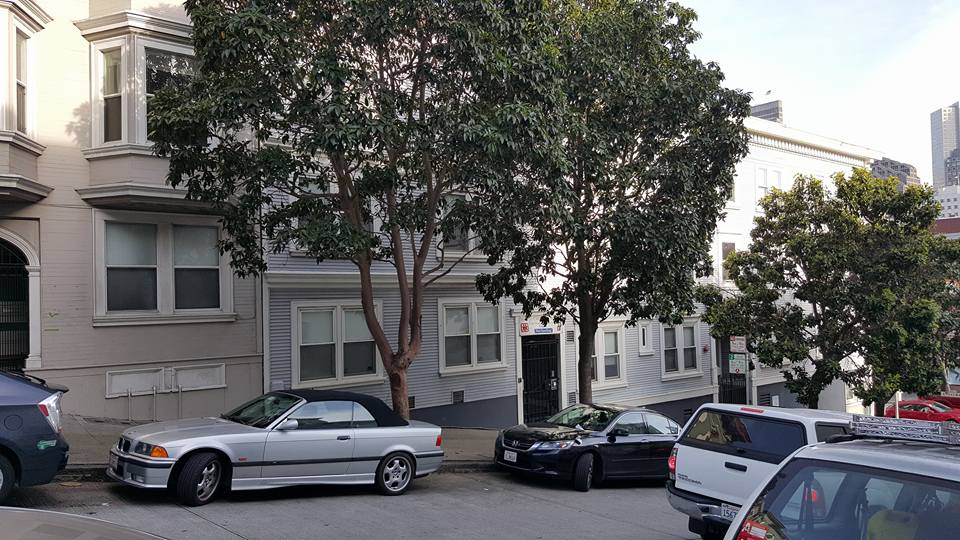 1010 Montgomery Street. In the apartment he shared at this address with Peter Orlovsky, Ginsberg wrote Part 1 of Howl.

“I am waiting for my case to come up

for a rebirth of wonder

for someone to really discover America

of a new symbolic western frontier

for the American Eagle

to really spread its wings

and straighten up and fly right

for the Age of Anxiety

for the war to be fought

which will make the world safe

for the final withering away

and I am perpetually awaiting

a rebirth of wonder”

— Lawrence Ferlinghetti, I Am Waiting 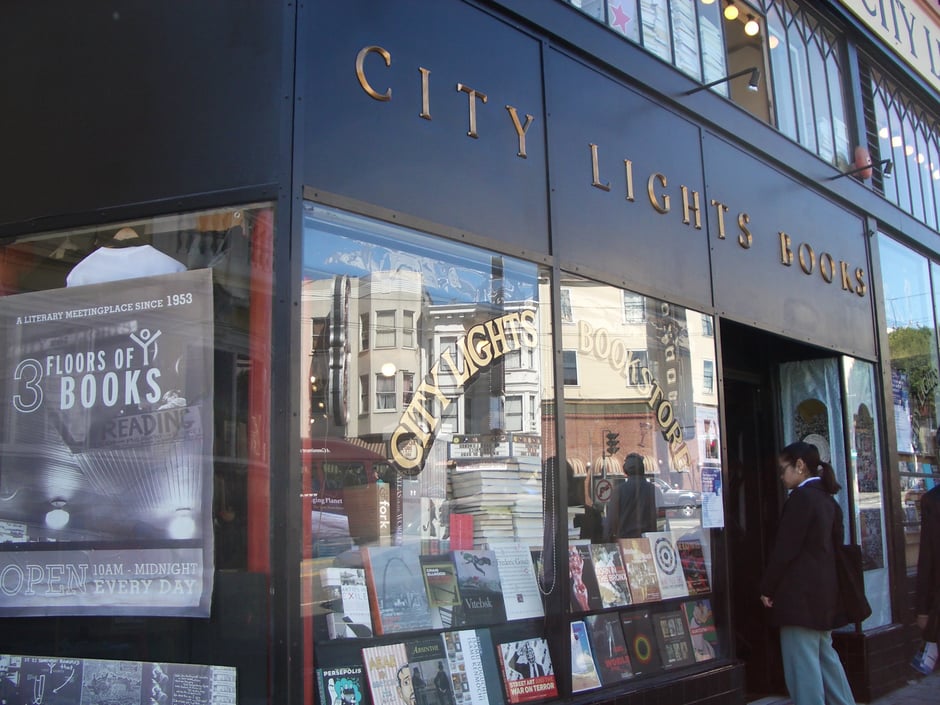 261 Columbus Avenue. Lawrence Ferlinghetti, author of “A Coney Island of the Mind,” published Howl at his City Lights bookstore and publishing house after hearing Ginsberg read the poem at the Gallery Six reading at 3119 Fillmore on October 7, 1955. (Other poets present included Gary Snyder, Philip Lamantia, Michael McClure, and Philip Whalen.) The reading served as the model for the second chapter of The Dharma Bums by Jack Kerouac, who also attended. Ferlinghetti and his manager, Shig Murao, were arrested on obscenity charges by the San Francisco Police after U.S. Customs seized the copies, which had been printed in London. He later successfully defended the poem against those charges.

This was not the only obscenity trial the City Lights press faced. In 1966, all copies of the poet Lenore Kandel’s The Love Book, which contained the poem To Fuck with Love, were seized, and City Light’s Ron Muszalski was arrested by the San Francisco Police (along with Jay Thelen and Allen Cohen of the Haight’s Psychedelic Book Shop). A San Francisco Municipal Court jury’s 1967 ruling that the book was obscene drove its sales. In a perhaps sarcastic act of gratitude for the ruling, which was overturned in 1971, Kandel contributed 1 percent of profits from book sales to the Police Retirement Fund.

Kandel was married to Billy Fritsch, a poet and member of the Hells Angels.

“Should I get married? Should I be good?

Astound the girl next door with my velvet suit and Faustus hood?

Don't take her to movies but to cemeteries

tell all about werewolf bathtubs and forked clarinets

then desire her and kiss her and all the preliminaries

and she going just so far and I understanding why

not getting angry saying You must feel! It's beautiful to feel!

and woo her the entire night the constellations in the sky” 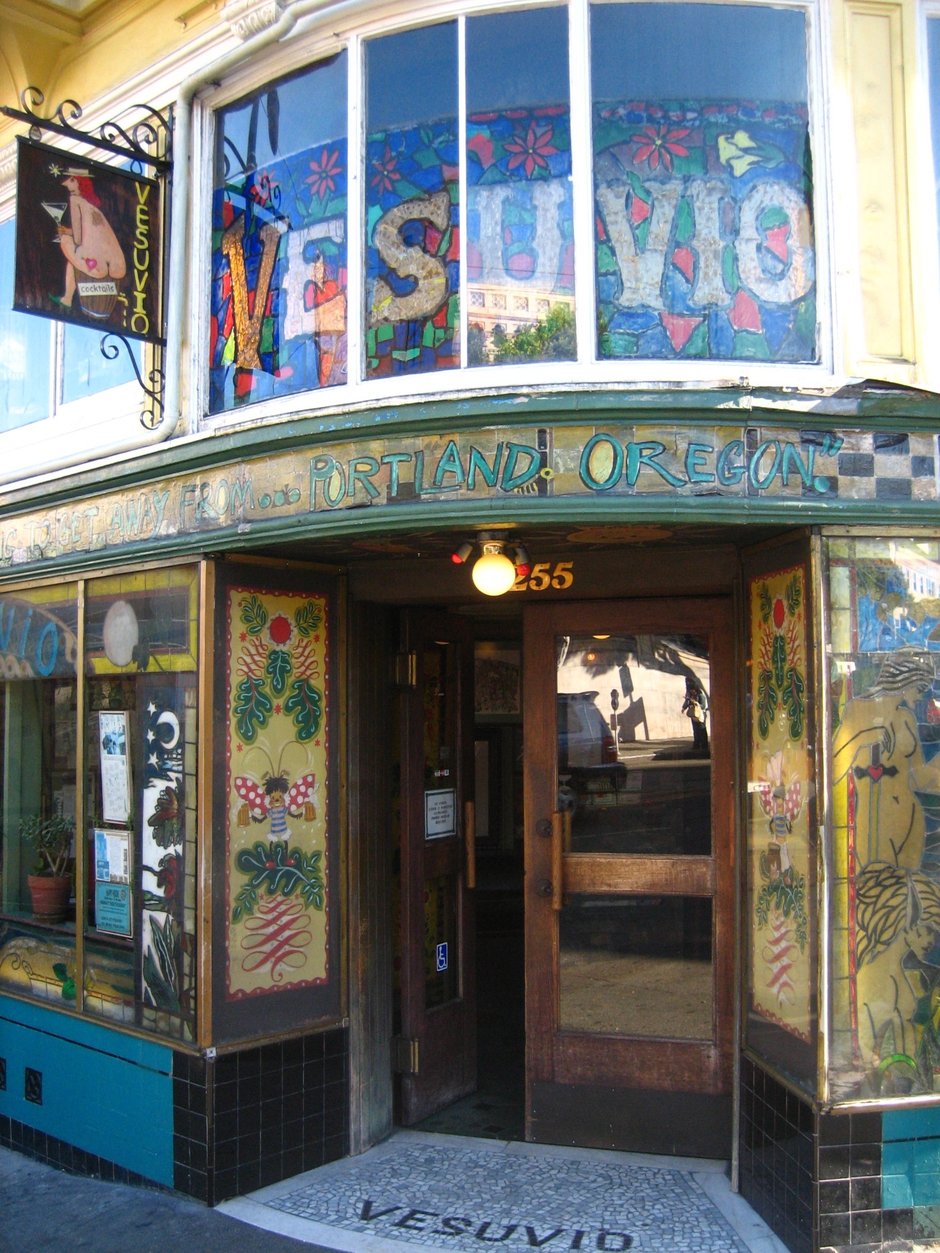 255 Columbus Avenue. In the overabundance of Vesuvio Cafe, Jack Kerouac got loaded and held forth on his frequent trips and short residences in San Francisco in the mid-1950s. The poet Gregory Corso, meanwhile, got eighty-sixed from Vesuvio. The statement of purpose above the door strikes with particular resonance to some: “We are itching to get away from...Portland, Oregon.”

If you’re wondering why there are not more minority writers and women in this list, you are not alone. I’m sure that the parameters of my exploration (locations in North Beach where literature was created or presented) limited my research, as did algorithmic search biases. I also considered that white males, even in areas of exception like North Beach, have historically been more likely to become celebrated and remembered.

Literary North Beach, however, is not an ethnic or sexual monoculture, and I’ve tried to include several figures who were neither white nor male nor Christian nor straight. I found others who are associated with the neighborhood, including the beat poet Diane di Prima and Shirley Jackson—author of the chilling short story “The Lottery”—but I could not find specific locations to tie them to.

If you’re interested in more, visit City Lights. The folks at the counter know more about the world of the word in the Bay Area than most of us will forget. 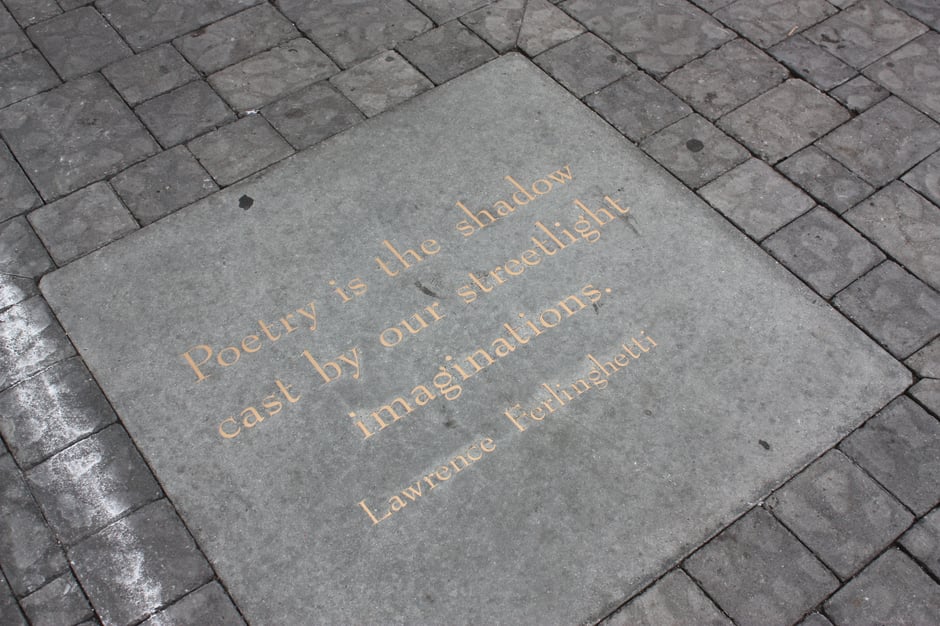 A poem about poetry by the founder of the City Lights. Credit: Chris, Flickr

What turns a city or a neighborhood or even a time into a font of literature, or music, or art, is a complex question. One thing seems reasonably clear, though: As Paul Fussell notes in Poetic Meter & Poetic Form, poets are inspired not by nature but rather by other poets. Being in a community with others who are doing, as well as understanding the value of, similar work pushes people to come up with solutions to their common challenges.

North Beach, along with the rest of San Francisco, is too expensive today to function as a magnet for ferocious poets. Its history, as well as its kaleidoscope of vistas, grand and intimate, are still here.

“Against the Word the unstilled world still whirled

About the centre of the silent Word.”